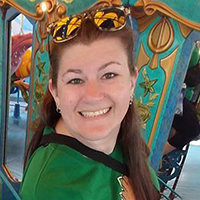 Nikki has been playing MMO's for quite a while. Well, one MMO: World of Warcraft. She is Artifacts Worldswide's residen "WoW Maven," having played every expansion since the game went live in 2004. Originally playing with the AWW crew on "Bored Remotely," when that program was shelved, Jeff invited her to join him on Wednesday nights playing "City of Heroes" on the Rebirth server.

Nikki's still not quite sure about this whole "superhero" thing, but she's learning and even having fun (occasionally).